I'm noting here what I found about the cheap JDY-08 module that's available on various Chinese markets. It is a very small device, probably made as a cheaper version of the HM-11. By default, it has different firmware on it which doesn't work as well as the official firmware.

I soldered a few wires to the bare module. In particular you need to solder VCC, GND, P02 and P03. This is not exactly the best soldering I ever did, and I wouldn't recommend it as I broke one of the connections (P22, which is crucial for flashing a new firmware on it). There is a tutorial on how to solder it properly over here that I haven't fully watched but it seems good.

Note that the actual device is very small, just a bit bigger than a thumbnail. 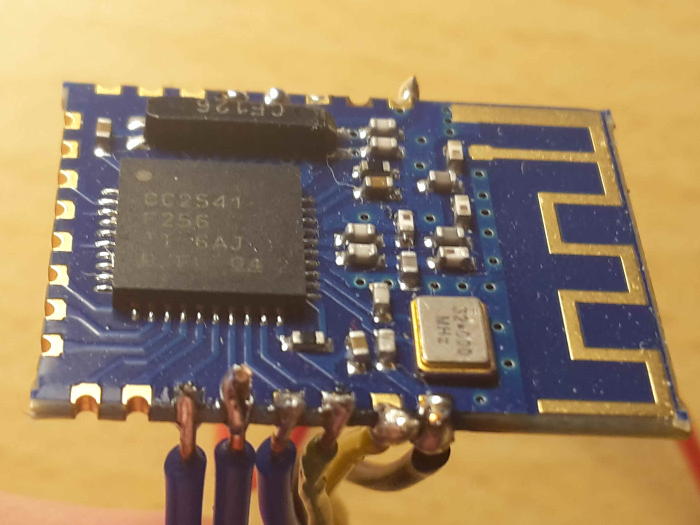 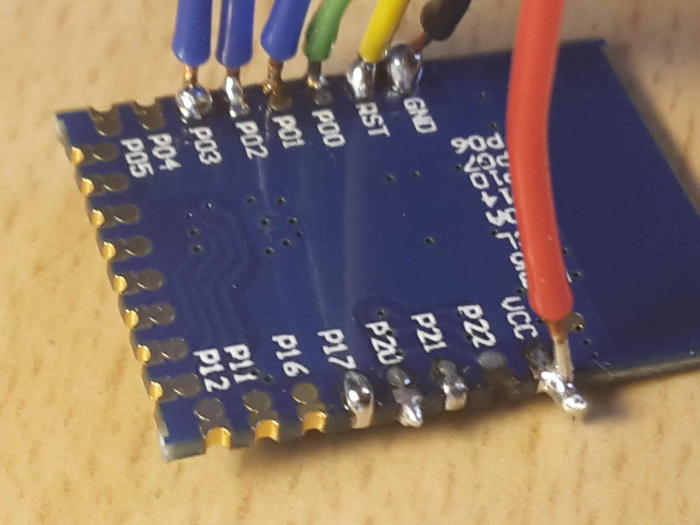 There are four wires you need to connect to communicate with an Arduino. Note: you will need level shifters between the 5V Arduino and the 3.3V JDY-08. I haven't tested it without them. It might work, but it might also blow up and the lifespan will certainly be shortened. You can also use a 3.3V Arduino, like this one.

To test that the device actually works, you only need VCC and GND. Just connect it and scan it using an app like nRF Toolbox for BLE. You should see the device show up as JDY-08.

So now you know the device works. The next step is communicating with it, and here it gets tricky. It took me a really long time to get to the right settings, but I got it working.

I tested using the following code, on an UNO. I have also tested it (using similar code as below) with a Pro Micro using the hardware UART on pin 0 and 1. Replace mySerial with Serial1 for that (note the 1).

Upload this code and open the serial monitor. It requests the firmware version from the device, when it lacks a normal test command. You can write commands directly in the serial monitor (in the text entry at the top of the window).

I am now able to communicate with it, set it's name, etc. I haven't really tried much with it for now, but I can request it's name, MAC address and version, and I can change the name. The firmware version I get is JDY-08-V3.381.

A few notes on the serial protocol:

The default firmware may still be useful for a device that is directly connected from a power source. Or maybe for something that only needs to run a short while. Or maybe the host mode has some use, I don't know. Flashing the HM-10 firmware on it probably makes it a lot more useful but I can't do that unfortunately due to the broken pin.

Right now I'm considering the nRF5x series by Nordic, starting with the nRF51822-04 module. Using the CC254x chips as serial slave device may work, but I want to try programming it myself as a SoC (just like the ESP8266). Many good points are mentioned over here, but these are my biggest issues:

Update: I have managed to flash the HM-10 firmware on it, but it doesn't seem to work. See my next post for a HOWTO.