DTSync: bidirectional directory synchronisation between any number of replicas

For years I've been using Unison and it has served me very well. It is a reliable piece of software with many, many configuration options. But not without it's limitations. So I wrote my own synchronization program DTSync.

The limitations of Unison I run into are:

The main problem I ran into was the first one, and it turns out it is the most difficult one of them all. Synchronizing more than two replicas is a very difficult problem. I will describe the exact algorithm in a future blog post (update: here it is), but let's say it isn't easy. Furthermore, detecting moved files and directories reliably is much harder than it sounds and impossible (without heuristics) on some filesystems like FAT.

So I started writing my own program. Actually, this is about the sixth time I tried writing this program, all previous versions had some issues here and there that I discovered only too late, when the design was quite fixed and hard to change. New insights usually come while writing a program. Additionally, with each new try there were more features I tried to fit in so it was a moving target.

The reason this version now actually works is that I intentionally left out some harder to implement features. I set out to built a Unison clone with only one extra feature: distributed synchronization. The result is DTSync: distributed tree sync. I also added a GTK3 interface for it to make working with it much easier. Other interfaces (e.g. Qt) can be added easily. 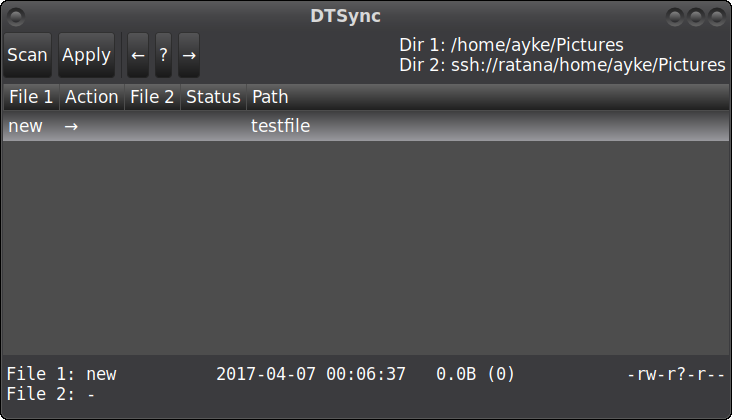 I have written DTSync in such a way that the algorithm itself and the file/directory/ssh parts of it are mostly separated. It should be possible to use it for any other type of synchronization (e.g. browser bookmarks). But still, it's hard to write such decoupled code when there's only one user of the library and with a single goal in mind (directory synchronization).

DTSync is written in Go and downloading/compiling it is quite easy once you have installed the official toolchan. You also need the librsync-dev package.

You can run dtsync directly once installed (it will be located at $HOME/bin/dtsync), or start the graphical interface using python3 $HOME/src/dtsync/gtk/dtsync.py <path1> <path2>. I hope that providing the paths won't be necessary in a future version, once profiles have been implemented.

DTSync isn't finished. I use it quite often, but still use Unison a lot for things I haven't yet implemented (mainly the lack of profiles / configuration files and some missing features). I do use it as the standard synchronization tool for my photo library and my music library. So far it works really well.

Of course, you can help improve it! The source code is all available on GitHub under a BSD-like license.